Vibrant city and a real pearl of the Mediterranean

The largest city on the Balearic Islands, the capital of the island of Mallorca – Palma  is where almost half of the entire Balearics’ population resides. Recently, it was voted as the best place in Spain to live. Each year, Palma property gets increasingly popular with the foreign second-home buyers who choose to stay in this lively and cosmopolitan city.

Luxury houses and apartments of Palma property market offer views over the Bay of Palma, Cathedral La Seu, Bellver Castle and city marinas. Here, you will get all the benefits of quality living in the international and perpetually vibrant area with its seafront location.

Prices on Palma property market are slightly higher compared to region’s regular. The average price for an apartment here is per square meter. Price for a house hovers around on average, while those looking to invest can expect averages of .

The most renowned agencies operating on Palma property market are Balear Invest, Engel & Völkers and Kensington International. These real estate agencies offer the highest number of listings in the area.

Located on the south coast of Mallorca, the city of Palma is an important holiday destination and commercial port. The city has everything you need without the feeling of being in a big city. It is a modern and lively centre which has still managed to preserve its ancient charm and remarkable culture with its old town buildings.

Besides the pleasant climate all year (17.9 °C annual average), what most attracts foreign residents and property buyers is the two hour flight distance to all major European cities. The city of Palma is also where the island’s international airport is location, which can be reached from the centre in just a ten minute drive.

The city is proud of its Old Town with the emblematic Cathedral, the Palace of the Almudaina, and the La Lonja square. Among other historical landmarks, you will also find here the peaceful Bishop’s Garden and the Banys Arabs (Arab Baths). All of this makes this wonderful city so charming and mystical at the same time. 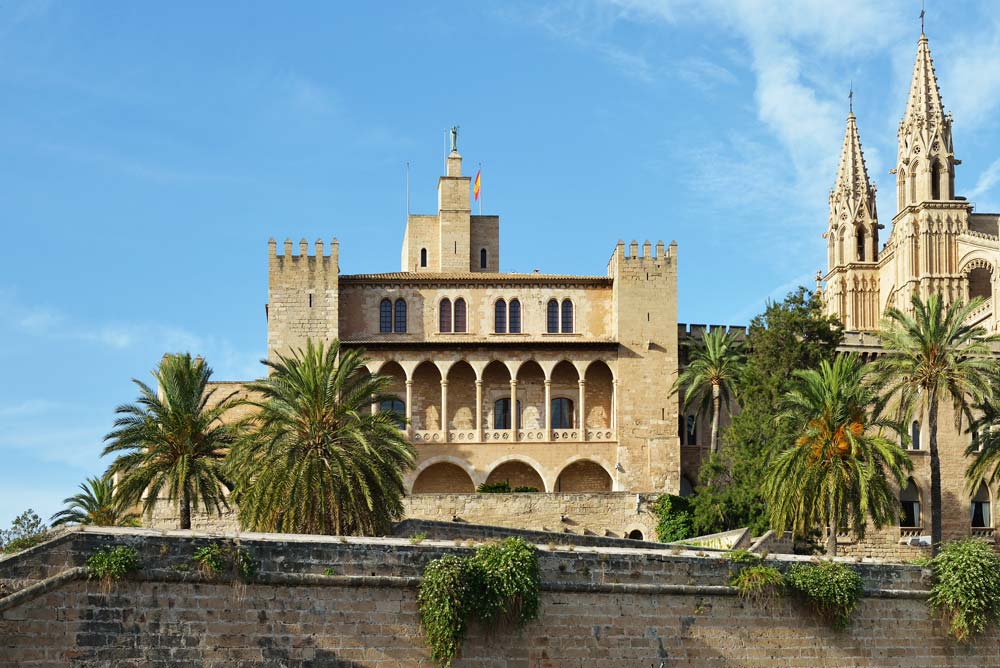 It is always nice to take an evening walk through the narrow cobbled streets of the ancient part of Palma. From sundown well into the night, a hive of bars and restaurants light up in La Lonja, attracting visitors and local alike.

There are eight great international schools, including British, French, Swedish and German schools, and excellent international clinics to complement the already superb local medical facilities. The city is a safe place to be in general and is serviced by five police stations.

The city also hosts the largest port in Mallorca. The port still has a working fishing fleet as well as a leisure marina for vessels of all sizes, including the superyachts and large cruise ships, and a sailing club Real Club Nautico de Palma.

The port is the super-yachts heaven, and there are many celebrities and wealthy tycoons who choose to spend time here on their million-dollar yachts. Such include Philip Green and his €20 million ‘Lionheart’, and the Barclays brothers, owners of the 96 metre-long ‘Limitless’ and the ‘Lady Beatrice’ – and the list goes on. 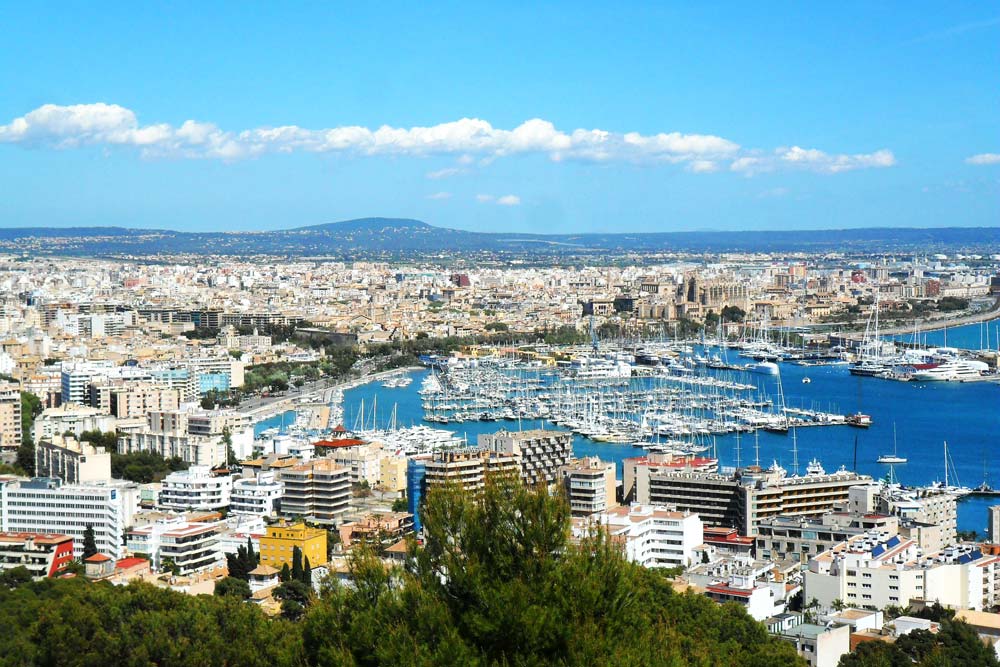 For golf lovers, the famous Arabella Golf resort with its three remarkable and exquisite eighteen-hole courses of Son Mauntaner, Son Quint, and Son Vida is reachable in a fifteen minute drive. Remarkably, the Son Vida course was inaugurated by Prince Rainer in 1964, making it the oldest golf course on Mallorca.

Palma’s Iberostar Stadium is a home for the football league team of Real Mallorca.

Palma property market range also enjoys the relatively close proximity to ones of the best beaches. For example, Cala Major and Platja de Palma can be reached in under a twenty minute drive.

The nautical centre of Palma, the Paseo Maritimo is the sea road that lines the bay area. This famous promenade offers a wide range of restaurants, eateries, and bars.

Palma is also a gastronomic paradise where you can eat the most delicious food, as well as discover the exquisite and high-quality wines produced in Mallorca. First-class restaurants, bars and cafes are abundant, some of which lie directly by the sea. You will be surprised how great and diverse the restaurant scene in Palma is. Whatever cuisine you prefer – Spanish, Lebanese, Italian, Japanese, Thai, Indian, or more – you will find it here. One of the most notable is the Michelin-starred restaurant Simply Fosh.

Palma’s Old Town’s high streets of Paseo del Borne and of Jaime 3 have become the two main shopping hotspots on the island. These streets boast designer boutiques and elegant shops, where most if not all of the famous brands are represented. The luxury promenade of Borne is now known as the golden mile of Palma. This designer street for affluent shopping is where Louis Vuitton, Hugo Boss, Carolina Herrera, Mulberry and Palma’s own up-market jeweler Relojeria Alemana have settled over the last few years. 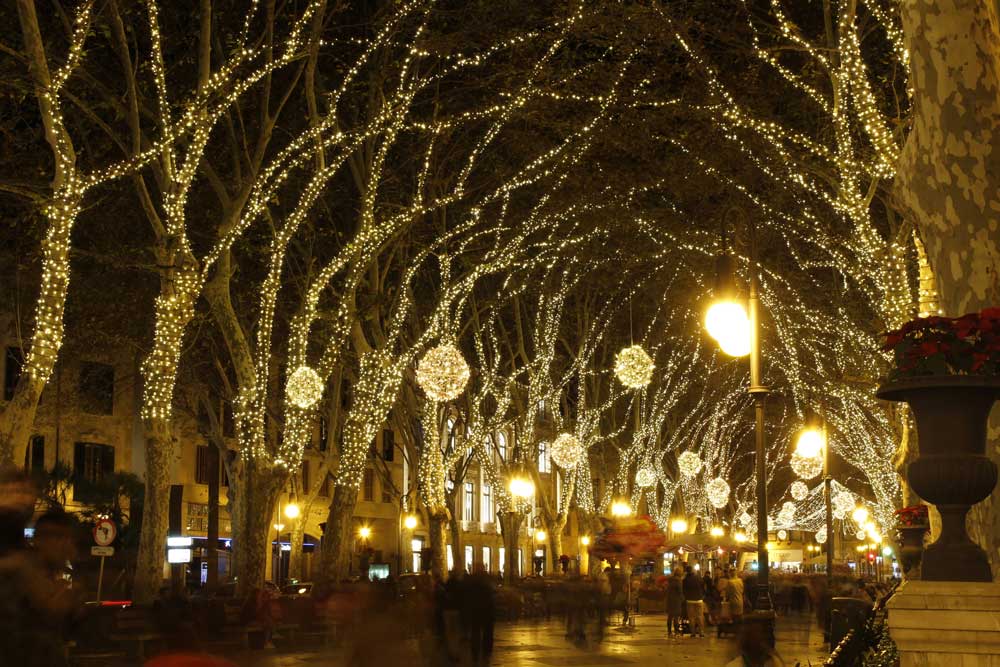 Palma is one of the largest cultural centres, offering a diverse cultural life of theatre, art and music.

A permanent museum and foundation of Joan Miro features more than one hundred paintings, sculptures and other studio pieces of this remarkable artist, whose close ties to Mallorca are seen in his works.

The nightlife and the partying scene of Palma are also very diverse and well-known outside the island. The most of the partying hotspots are concentrated between La Lonja, Santa Catalina and on Paseo Maritimo.

Paseo Maritimo on its long strip hosts ones of the most popular dance clubs, such as the legendary Tito’s and the global brand Pacha, which has once again reopened in Palma.

In La Lonja you will find the best jazz clubs of the city, as well as the unique cocktail bar Abaco, housed in sixteenth-century palacio.

The bohemian area of Santa Catalina has the lively atmosphere and is packed with cosmopolitan bars and eateries that buzz after dark. It is a great place for meeting friends, enjoying a cocktail, and eating tapas or dinner at one of the local restaurants.

There are not many capital cities where you will find a beach club, but Palma has three of them. For example, Anima Beach is just a short walk from the Cathedral. Here you can enjoy time by the sea in style all year round.

Palma comes alive during summer with a host of outdoor cultural events under the heading of ‘Nits a la Fresca’, which among other events, includes the nightly film screenings.

The city is also the location of the island’s most important art event, which is held on the third Thursday of each September – ‘La nit de l’Art’. It is the night when galleries, museums and art studios open their doors until around midnight with various exhibitions of the local and international artists.

By getting to know the cosmopolitan and year-round vibrant capital of Mallorca and the center of Palma municipality, which has so much to offer, you will understand why it is considered as one of the pearls of the Mediterranean, which attracts thousands of visitors and foreign second-home buyers.