Historical blend of culture in the traditional heart of the city

Amongst the greens of the parks and the blue of Tejo, Cais do Sodre – Sao Paulo in Lisbon is a colorful and lively place to live in. The area is famous for its lifestyle and idyllic location in between the prestigious Praça do Comercio and quaint Santos district. Lisbon real estate is booming and Cais do Sodre property market is not an exception.

As one of Lisbon’s main characteristics is the hilly terrain, a fair amount of Cais do Sodre apartments are offering astonishing views over the Tejo river.

The average price for apartments in Cais do Sodre moves around per sq. meter. Investment opportunities and new developments are to be found here for per sq. meter on average.

A piece of history

Sodré is the name of a 15th-century family from the neighborhood, historically linked to the maritime trade. Over time, the entire area from the waterfront to the northern boundary became known as “Cais do Sodre”.

Across from the station is Praça Duque da Terceira, the square of the Duke of Terceira whose bronze statue stands at the center.

In Praça São Paulo stands the beautiful Igreja de São Paulo, one of the finest Pombaline style building, constructed in 1768 after the devastating 1755 earthquake.

In addition, not far from the square is the Lisbon’s biggest food market, the lively Mercado da Ribeira, dating back to the 19th century. Here, you’ll get fresh produce from the coming boats. 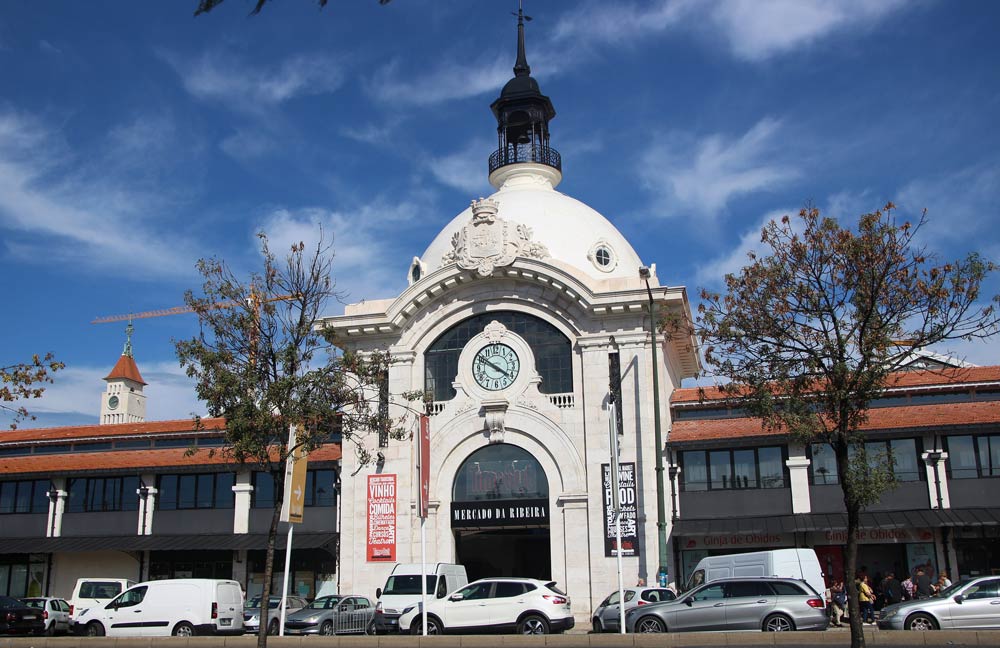 The nearby square of Praça Dom Luis is full of charming palm trees and has a 19th-century statue of the Marquis of Sá da Bandeira.

Rua Nova do Carvalho, behind the market, was at first known for decades as the city’s “red-light district,” to attract Nordic sailors off the boat’s berth. Today, it’s now a seedy-chic street with hip bars and clubs providing evening entertainment.

The Miradouro de Santa Catarina, also known as the Adamastor viewpoint, is the peak of one of Lisbon’s seven hills. The tradition goes that, between the 16th and 18th centuries, this was the place to admire the departure of the Portuguese royal family to Brazil and the rest of the world. This resulted in the popular saying “seeing ships from the top of Santa Catarina”. 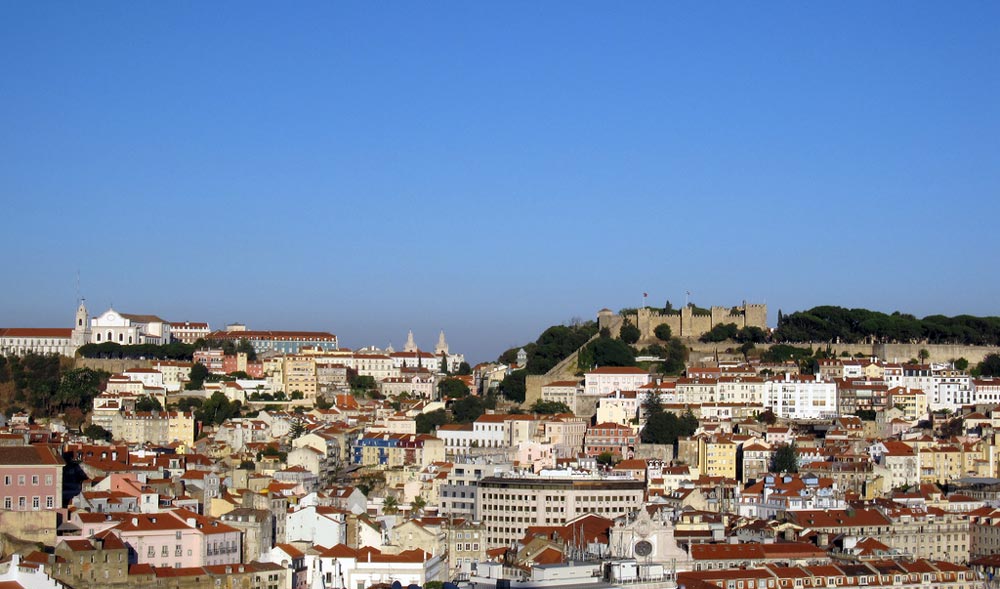 Nowadays, the Santa Catarina viewpoint has a young and relaxed atmosphere. The tranquillity of the gardens makes it the perfect spot to admire the sunrise and sunset over the Tejo River, the 25 de Abril Bridge and the Christ the King statue. In addition, it provides a nice view of Cais do Sodre apartments. 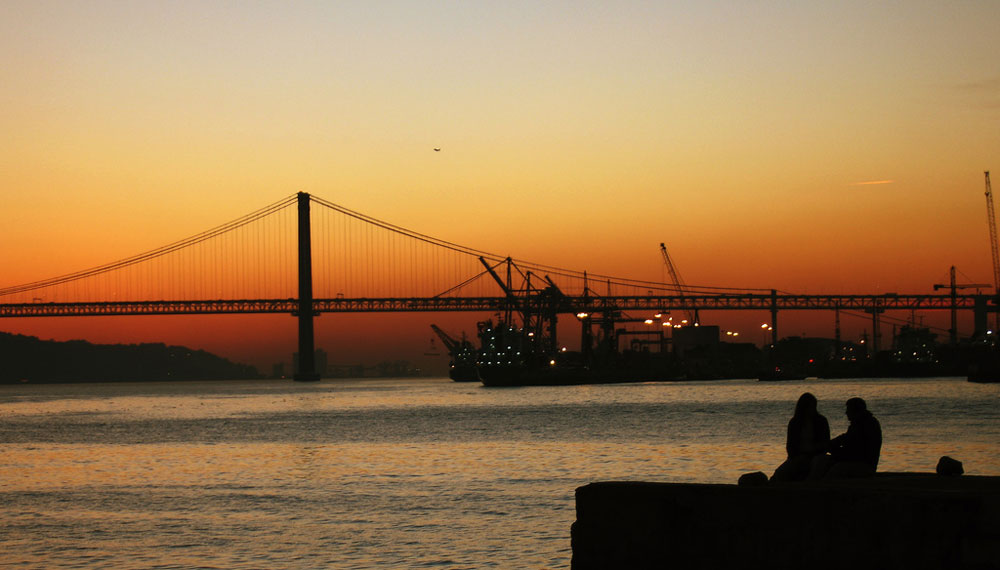 Why Cais do Sodre property?

In between Santos and Baixa-Chiado, Cais do Sodre – Sao Paulo area is well located. For a long time, this part of the city was neglected, with beautiful buildings falling into ruin. The area was completely transformed from a run-down area to a desirable place to live. This is partially due to a regeneration package of building works funded by the Lisbon Council, the clamping down on the nightlife in Bairro Alto and the tolerant attitudes of the district.

The capital projects have dramatically enhanced the appearance of Cais do Sodre. Lisbon’s great location and the economic boom the city is experiencing, means most of the old buildings are being renovated, moving from traditional, to more modern styles. The Jardim de Roque Gameiro is now a charming plaza. Cais do Sodre property market is experiencing a true transformation.

This is also the case in the Ribeira das Naus, the new beachfront and promenade of the Tejo estuary between Cais do Sodre and Praça do Comércio. This rejuvenated area comprises of a stepped waterfront ideal for sunbathing and a grassy area behind the promenade. 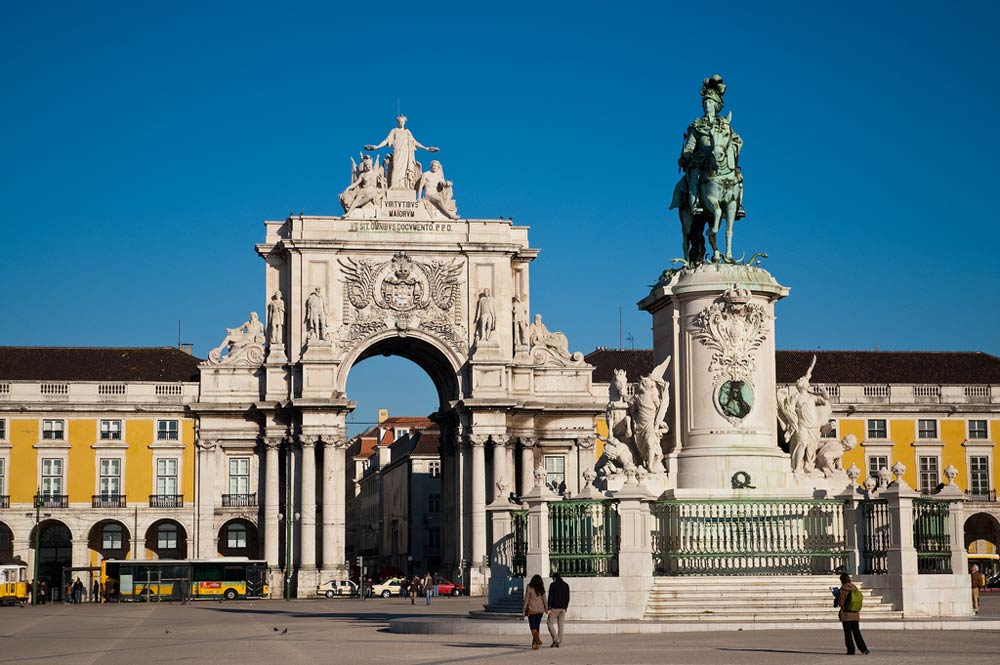 Reasonably close to the airport, this area is approximatively 20 minutes away by car in good traffic. Therefore, the neighborhood is one of the most connected parts of the city.

The ferry terminals that link Lisbon to Cacilhas and Almada are easily reached. Additionally, the two main buildings for the Cais do Sodré station complex are located here. It is both convenient and fast to navigate between both stations.

When all of the night-time animation of Pink Street gets too much, the train station is your escape. It leads directly to the glorious coastline of Lisbon and allows you to reach the best beaches in a matter of minutes.

By day the Praça de São Paulo is another quiet plaza that doesn’t attract too many tourists. At night, it becomes the focal point for socializing and drinking before people move onto the clubs of Pink Street.

If you are ready for fun, you are in the right place. Cais de Sodre and the now famous Pink Street is an endless source of dynamism and entertainment. Lisbon’s riverside is now one of the city’s trendiest nightlife districts. This once-neglected area has become fashionable. New shops, cafes, and bars have opened, while the entire waterfront has undergone a brilliant rejuvenation. 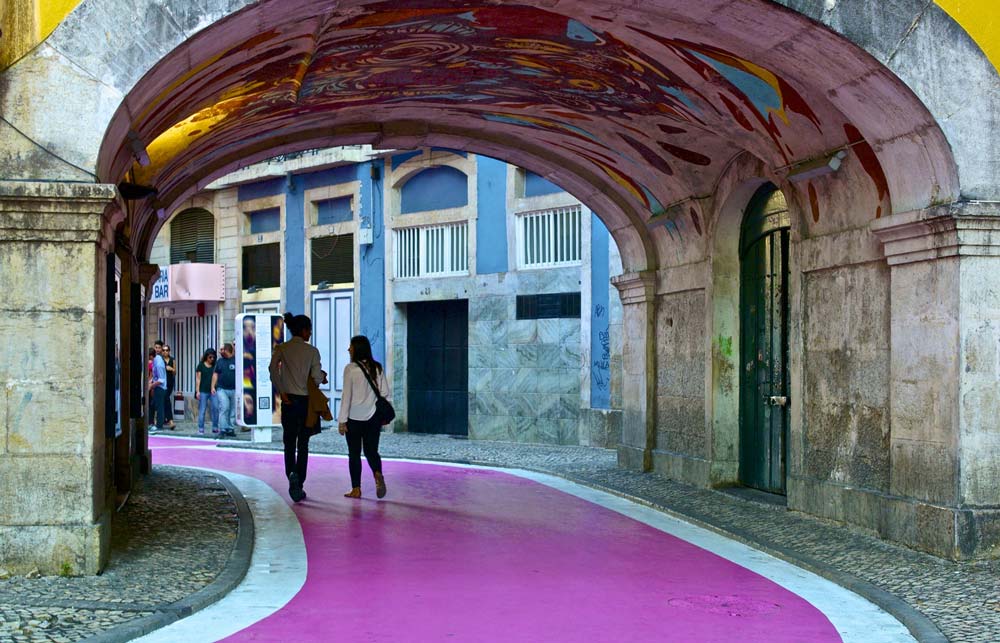 Beyond socializing in Pink Street, you can catch the ferry and cross to Tejo Estuary to Cacilhas. This town is now famous for its fresh fish restaurant. For a shorter trip, the Ribeira das Naus is becoming a popular place for Lisbon’s residents to relax. In fact, deckchairs are here so you can enjoy the morning sun after picking up your breakfast from a typical stall.

Besides chilling, the flat paths along the river provide one of the only suitable places for cycling or running in Lisbon.

In addition, if you are into hiking, climbing up the Miradouro de Santa Catarina is a rewarding activity. Besides the amazing spot, there is a breath-taking view to enjoy the sunrises and sunsets in Lisbon. Visitors and locals mingle as much as with musicians and street performers.

Furthermore, the beautiful Mercado da Ribeira hosts both the Timeout market and the Mercado de Lisboa. In the Timeout Market, the finest independent food stalls fulfill desires with flavors from the around world. In the Mercado, you will experience the typical Portuguese lifestyle in this colorful place. Among the locally grown produce, there are flowers and regional cheeses. Varinas (fishwives) offer a selection of fresh fish. At weekends you can find handicrafts and antiques on offer in the market. With a Cais do Sodre Property in the beautiful heart of Lisbon, you are in the mix of it all.