Regions and neighborhoods of Cascais Province 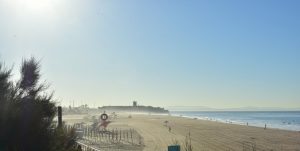 Cascais is located on the western coast of Portugal

The province of Cascais is located 30 km from the Portuguese capital – Lisbon. It borders with the municipal areas of Sintra (at its North – West) and Oeiras (in the East).

Cascais, Portugal experiences a fairly seasonal climate: Summers are warm and humid with average temperatures of 23 degrees Celsius (74 degrees Fahrenheit) and nearly 11 hours of sunshine per day. Winters are cooler and windy with the coldest temperatures dipping to 12 degrees Celsius (53 degrees Fahrenheit) and as few as four to five hours of sunlight per day.

Cascais receives the most rainfall in November with up to 144 millimeters (or 5.6 inches) of rain.

The best time to enjoy water sports and swims along the coast is in August. Then, water temperatures reach as high as 22 degrees Celsius (71 degrees Fahrenheit). July and September experience only slightly lower water temperatures and are still fitting for water activities.

International homebuyers who are seeking a cosmopolitan alternative to busy Lisbon can find similar features without the high price tags in the western municipality of Cascais. The benefits of purchasing a Cascais property include residing on the outskirts of Lisbon while still enjoying access to modern-day amenities, first-rate cultural experiences, and breathtaking coastal beaches.

Cascais properties are located approximately 30 kilometers (19 miles) west of Portugal’s capital city of Lisbon. Cascais is considered a “municipality” and a suburb of Lisbon. It graces the southwestern coast of central Portugal bordering the Atlantic Ocean. The region once served as a holiday retreat for royalty and today still caters to its opulent international residents.

RE/MAX, listing over 450 properties in Cascais is the most renowned agency here. Following directly are Sotheby’s and Porta da Frente (Christie’s), each with around 300 listings and ERA with approximately 200 listings.

Lisbon’s airport is accessible from Cascais in 30 minutes by car. The nearest port for docking yachts and boats, the Cascais Marina, is the Bay of Cascais.

Along the western coast of Cascais there are additional beaches. Here, residents can find fewer people but slightly rougher waters.

The stunning sea views raise the prices of Cascais houses to 5.250€ per sq.m. Apartments overlooking the coast are to be found here for 6.100€ per sq.m. on average.

The PSP Cascais police station is located in the center of town on Rua Afonso Sanches. Also, several hospitals are throughout the region, including the following: Hospital de Sant’Ana near the Pinhal do Junqueiro park, the Emergency Hospital of Cascais in Alcabideche, and the CUF Cascais Hospital in Barrio de São Jose.

The plethora of golf courses accessible from a Cascais property makes the region amenable for international homebuyers. From 18-hole championship courses at the Quinta de Marinha resort to Oitavos, one of the world’s top 75 courses and the second best in mainland Europe, opportunities for tee time abound.

The average price of the few apartments overlooking Cascais golf courses hovers around 5.150€ per sq.m.

At the Marinha Equestrian Center, take a seat in the grandstand for horse shows and races. This is one of the Iberian Peninsula’s largest equestrian facility.

Cascais backs up to the immense Sintra-Cascais Natural Park. Here, you can enjoy 36,000 acres of walking paths, hiking trails, and architectural finds. In addition, it offers expansive views over the Atlantic Ocean.

Several Cascais beaches have been awarded the European Blue Flag for excellence and are particularly suitable for residents with children. Past award recipients include the beaches of São Pedro do Estoril, Carcavelos, and Parede, among others.

Fine Dining and the Portuguese Culture in Cascais

Residents of Cascais properties can gallery hop among VSB Art or Art’i Batik in Cascais proper. They can also meander to the David Levy Lima gallery or Luchapa gallery in Parede.

For fine dining in Cascais, opt for fresh fish and rice at Luzmar, mentioned in Michelin Guide for fresh fish of the top quality. You can also top off top-notch seafood with some of the region’s best wines at Visconde da Luz. Residents enjoy sunsets dinner at the spacious terrace of Mar do Inferno, located near a cave with the same name, Boca do Inferno.

Cascais throws extravagant parties for holidays throughout the year.  Enjoy early spring’s Carnival, summer’s jazz festival, and nearby Estoril’s handcraft festival, the oldest of its kind in Portugal. During the last weekend in August, Cascais residents celebrate the Festas de Viana. They can also enjoy the Sea Festival, which has been celebrated for centuries.